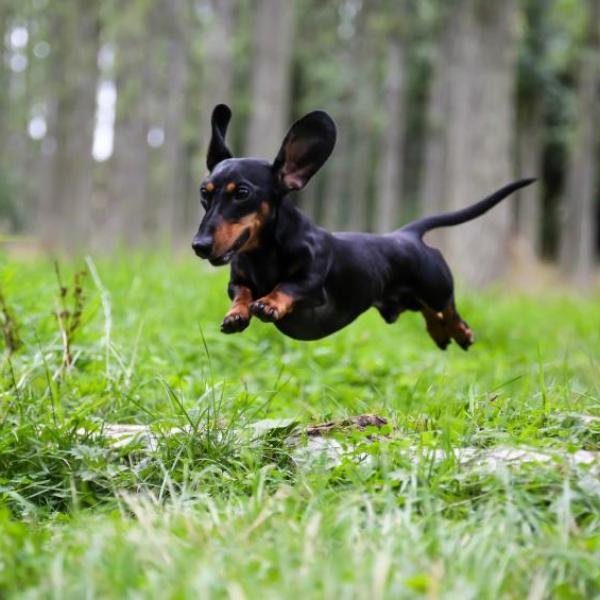 Dachshunds are playful, but as hunting dogs can be quite stubborn, and are known for their propensity for chasing small animals, birds, and tennis balls with great determination and ferocity. Many dachshunds are stubborn, making them a challenge to train.

Dachshunds are statistically more aggressive to both strangers and other dogs. Despite this, they are rated in the intelligence of dogs as an average working dog with a persistent ability to follow trained commands 50% of the time or more. They rank 49th in Stanley Coren's Intelligence of Dogs, being of average working and obedience intelligence. They can have a loud bark. Some bark quite a lot and may need training to stop, while others will not bark much at all. Dachshunds are known for their devotion and loyalty to their owners, though they can be standoffish towards strangers. If left alone, many dachshunds will whine until they have companionship. Like many dogs if left alone too frequently, some dachshunds are prone to separation anxiety and may chew objects in the house to relieve stress.

According to the American Kennel Club's breed standards, "the dachshund is clever, lively and courageous to the point of rashness, persevering in above and below ground work, with all the senses well-developed. Any display of shyness is a serious fault." Their temperament and body language give the impression that they do not know or care about their relatively small size. Like many small hunting dogs, they will challenge a larger dog. Indulged dachshunds may become snappy or extremely obstinate.

The breed is prone to spinal problems, especially intervertebral disk disease (IVDD), due in part to an extremely long spinal column and short rib cage. The risk of injury may be worsened by obesity, jumping, rough handling, or intense exercise, which place greater strain on the vertebrae. About 20–25% of Dachshunds will develop IVDD.

Treatment consists of combinations of crate confinement and courses of anti-inflammatory medications (steroids and non-steroidal anti-inflammatory drugs like carprofen and meloxicam), or chronic pain medications, like tramadol. Serious cases may require surgery to remove the troublesome disk contents. A dog may need the aid of a cart to get around if paralysis occurs.

A new minimally invasive procedure called "percutaneous laser disk ablation" has been developed at the Oklahoma State University Veterinary Hospital. Originally, the procedure was used in clinical trials only on dachshunds that had suffered previous back incidents. Since dachshunds are prone to back issues, the goal is to expand this treatment to dogs in a normal population.

In addition to back problems, the breed is also prone to patellar luxation which is where the kneecap can become dislodged. Dachshunds may also be affected by Osteogenesis imperfecta (brittle bone disease). The condition seems to be mainly limited to wire-haired Dachshunds, with 17% being carriers. A genetic test is available to allow breeders to avoid breeding carriers to carriers. In such pairings, each puppy will have a 25% chance of being affected.